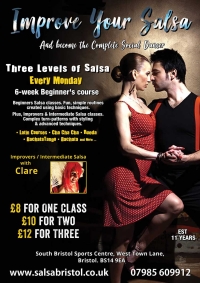 Richard is one of the youngest brightest and most talented up and coming stars on the UK salsa scene.

Although he has only been dancing salsa since 2008 his rise to the top comes as little surprise to those who know him. Richards's background lies in street dance and primarily Hip-Hop. Much of this was learnt through watching others and then copying and often improving the moves.

Richards's first taste of salsa was when he worked in Lanzorote opposite a Latin bar. Upon his return to England he found a class and after just two lessons his talent was spotted and approached by Frank Santos. After a year of training with Frank, Richard was deleted to be asked to join Frank's International dance troop ‘A Yemaya'.

Since then Richard has trained almost daily and as such now teaches in Kent and all around Surrey to an intermediate/advanced standard in both salsa and bachata. More recently, Richard has been approached to teach at International Congresses.

Richards's passion for dance is second to none and he continues to improve and develop his own dancing talent under the watch full eyes of Frank Santos. He is furthering his study of a variety of different styles including Cuban, Rumba, Son, Cha Cha Cha and contemporary dance.

NB: We were so impressed watching Richard dance when he came down from London one weekend we just had to hire him! I don't think it will be the only time either!

NB: Having now worked with Richard, we have booked him for a series of workshops that will focus on teaching styling and flair! We have also booked him for our next and biggest all day event ever for three lessons on Saturday 22nd May 2010.