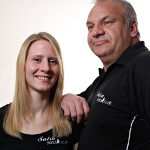 Not being the fastest learner he found it hard as a beginner to learn the turn patterns, keep the timing, lead the leads and think about what move to lead next without putting in 10 or 20 mambos first.

He decided that so many others must struggle in a similar way that a new method could be taught in the form of weekly courses as opposed to drop-in classes. Having given much thought to this and realising that this wasn't being done elsewhere (certainly not in the South West) he spent the next 18 months travelling the West Country trying different teachers and learning not just what works but also learning what doesn't work so well! This concept soon became popular, and several companies have tried to copy a similar format, without the same success!

In 2008 Wayne set up his first class teaching a beginners course in South Bristol. His fun and charismatic style of teaching brings laughter to the arena, and the courses allow pupils to learn at their pace in a safe environment. Such is the popularity of these courses that there are now at least four teachers available each night all taking different levels and teaching varying levels of technique and styling. There are currently six courses running each Thursday night.

Since beginning on his teaching career Wayne has taught workshops for entertainment companies; stag and hen nights, at salsa parties, choreographed and taught wedding dances and notably for the International Bristol Balloon Fiesta. Wayne was most proud of this appointment but feels having four of the Red Arrow pilots take part in his lesson was a highlight of his career to date. In fact, the pilots enjoyed the group lesson so much that they later asked for a private lesson.

In 2010, he was approached by the local authority to teach salsa to primary school children which he found a most challenging but enjoyable experience. His teaching experience continues to grow having now taught in Bristol's new shopping Centre 'Cabot Circus' as well as for several charities including Oxfam and Mencap.

Wayne believes, and has proven he can teach anyone to dance, from 6-year-old children to adults with learning difficulties to mass crowds to small classes!

In 2013 Wayne retired from teaching and the public side of Salsa Bristol - he now helps behind the scenes in an advisory capacity and helps coordinate activities however he does make guest appearances to teach every once and a while.